Justin Dingwall,  successful artists of his own right, has come together with Roman Handt to highlight non-conforming beauty standards despite the differences in their mediums. One is a photographer who reveals humanity’s potential through all types of people. Meanwhile, the other is an avant-garde fashion designer who creates unconventional garments to tell unique narratives and break gender norms. Justin Dingwall’s complete profile here.

The two artists in their collaborative photography series, Rerouted, create visually striking images using miniature motorcycles, planes and bicycles, and recycled bags to capture the present-day restrictions on travel, as well as the unexpected paths we must all take in order to be a more advanced society.

There is Beauty in Everyone

Through his photography, Justin Dingwall portrays figures that can champion a particular cause, seeking non-conventional perspectives on African beauty and humanity. His works are highly evocative, transcending the professional and convincing the audience that beauty does not conform.

An example of the unconventional beauty that Justin Dingwall has captured includes albinism and vitiligo, which are taboo and are unfortunately discriminated against at many levels. The artist uses unusual tools such as paper and water to convey his message, along with butterflies, snakes, and birds with contrasting backgrounds.

On the other hand, Roman Handt is one of the first voices in the menswear design movement, breaking down conventional gender stereotypes with his self-titled label. Through the use of intricately woven African textile patterns, Handt brings a sense of chaos into his process of creating garments that merge male stereotypes with modern urban life to create a new type of hybrid male.

Handt aims to challenge the stereotypical male image, allowing the 21st-century man to be more expressive through his fabric. Furthermore, he aims to inspire fellow designers to uplift and innovate the fashion industry, especially in Africa. 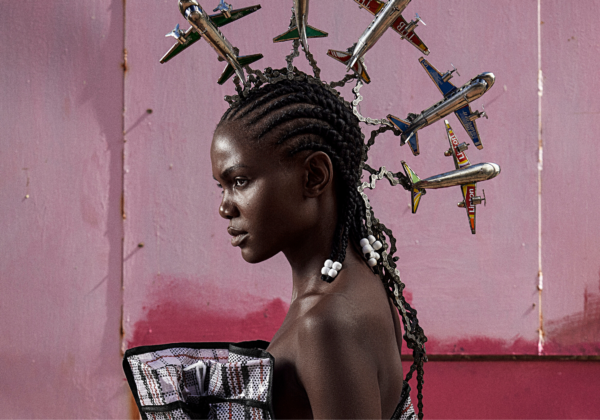 Justin Dingwall and Roman Handt have both created a name for themselves in the world stage art scene, featuring non-conforming beauty of all kinds in the spotlight.

Justin Dingwall, a celebrated Johannesburg-based artist, has had numerous local and international exhibitions. Among the most notable is his work on “Fly by Night,” featuring elegant portraits placed against clean minimal backgrounds to combat xenophobia in Africa, with the integration of swans to highlight the beauty of difference.

Justin Dingwall’s works have been exhibited in Sasol New Signatures and Absa L’Atelier Top 100 exhibitions in 2014 and 2015. He also won a gold for portraiture at the Fuji Film Awards and won an award at the 2013 IPA – international photography awards.
Roman Handt, meanwhile, is an award-winning South African fashion entrepreneur with pieces that challenge the menswear fashion world, which has been adopted by many since its creation. His self-titled brand was announced as the 2019 TT100 Winner of the Director General Award for Overall Excellence.

One of Handt’s recognizable fashion creations is his stylish fightwear collection, which empowers young boxers to embrace the playfulness they often sacrifice to restrain and sublimate their personalities into their clothes, similar to the superheroes we all idolize.

Aiming to empower people subject to discrimination while challenging beauty standards, Justin Dingwall mentions that he intends to “celebrate beauty in difference” and that “diversity is what makes humanity interesting.”

Justin Dingwall also emphasizes that his art seeks to “resonate with humanity and make people question what is beautiful.”

Meanwhile, Roman Handt aims to break down male boundaries and make fashion gender-neutral. As Handt states, his brand “is for the fearless, the bold, the inquisitive, and the worldly individual. It is for the non-typical, a man with an eye for detail and an expression of a unique identity.”

A Johannesburg-based artist through and through, the urban intensity of the city has made a significant impact on his success and vision until today.

Roman Handt and Justin Dingwall are some of the most promising artists of this generation. These two artists have found ways to break beauty and gender stereotypes as well as showcase the African culture that they are both proud of. Their combined efforts are instrumental in making art a voice for advocacy.

You can see more of Justin Dingwall’s photography on our website. exhibition | irenic or not ?