Patrick Van der Elst : A Surreal Take on the World

The Belgian-born and raised Patrick Van der Elst may regard himself as a self-taught photographer, but his works are far from amateurish. As opposed to spur-of-the-moment photography, his approach emphasizes deep reflection and long clinical settings to question our society and way of life.

The artist may have derived this from his profession as an anesthetist, which allowed him to somehow combine the technical perseverance and preparation with a surrealist artistic vision that covers a variety of societal themes.

As Patrick Van der Elst is a self-taught artist, he combines photography with painting, which may be why the planning and preparation for one picture can take him a month.

Sex, money, and religion are among the themes that draw Van der Elst to create unusual images on the edge of controversy. Though his work is not dominated by any one theme, many see his paintings as exploring womanhood and sexuality.

Additionally, he blurs the lines between reality and imagination by exploring the role of advertising and consumerism in modern society using children, plastic dolls, toys, and masks. The oddly placed objects, models, and backgrounds are staged in such a manner that they are all in such a strikingly bizarre arrangement, creating stunning and commanding images that demand attention from the viewer.

The thought-provoking pieces may not be limited to one theme and, as such, are able to refer to multiple societal issues, making them a significant part of the contemporary art scene.

Look me in the eyes (2021), one of Patrick Van der Elst’s most famous pieces, is a portrait of a young woman surrounded by many eyeballs in a colorful mosaic-like background. We approach this art at first with the innocence of a child, viewed by the world as sincere and not trying to hide a lie. But through the eyes of youth, we also see “directly to the self, to the intimate, the secret, the hidden.”

There is a conflict between innocence and sensuality. “Leave my body, my nudity, my sensuality out of it. Or is it exactly the opposite idea. Put your eyes all over me,” Van Der Elst emphasizes.

His other work, Ego (2021), depicts a model posing with a selfie stick colonized by countless spectators as a representation of a “thumbs-up generation” longing for a rush of dopamine. As Van der Elst points out, this poses a question to society about the staging of oneself: “Is this the birth of a tyrant individual? Is that the cause of a disappearing common world?”

Since 2011, Van der Elst’s work has been exhibited in Spain, Belgium, France, and his birthplace of Brussels. A First selection of the Arte Laguna Prize was awarded to him in 2014, and he has shown in both group and solo shows since then.

Being constrained to a particular category or field of art poses a problem for Patrick Van der Elst as an artist. It is essential for the artist not to be locked into any particular style or ideology to sustain creating a dreamlike and original universe.

In his own words, Van der Elst defines himself as self-taught and somewhat of a jack of all trades since he must set up sets, paint backgrounds, create sculptures, create stagings, place lightings, and rework images.

As he discusses Marguerite (2021), an artwork depicting the vulva through 1,500 beautifully adorned daisies, he highlights how the flood of comments immediately referred to it as the vagina, not the vulva, questioning society’s knowledge and judgment on female anatomy.

“All those flowers whose implantation conjure up the image of a vulva are themselves sexual organs of the plant world… I wanted to try to talk about the vulva in another field than anatomy or pornography,” Van der Elst emphasizes.

Van der Elst’s works are primarily guided by the emotion he can arouse. A certain idea of society is presented through his paintings through diverse themes, ranging from feminism and motherhood to egoism and consumerism.

Among today’s contemporary art scene, Patrick Van der Elst stands out for his personal encounters, his readings, and his work as a physician, which provide an inexhaustible source of inspiration. His art combines creativity and technical precision in a way that energizes his audience and allows the message to resonate with them. 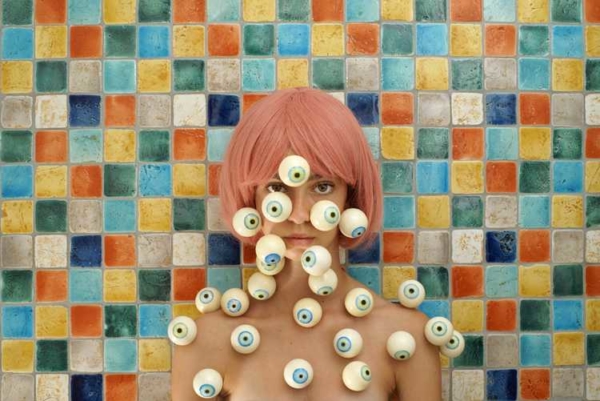